MJTV: Black Joe Lewis and the Honeybears with The Relatives - Let Your Light Shine - Live @ #sxsw

My #1 moment at #sxsw so far this year is Austin's Black Joe Lewis live with Reverend Gean West and The Relatives performing "Let Your Light Shine" at the Daystage Stage, Austin Convention Center, 3.18.2011

Truly doesn't get hotter than this performance at Emo's Jr in Austin TX last night...

Cincy's Bad Veins performing live @ SXSW in Austin Convention Center 3.17.2011. Sometimes the best band is right around the corner from you, playing in a glorified hallway...

Hit the ground running this time, with two bands under our belts before we could even check into our rooms. (Thanks Radisson!)

The Woggles (A): The legendary Georgia band always brings the goods. You can see the videos. Classic garage rock delivered with high energy and charisma. They set the bar high for the rest of the week!

Yuck (B): This London band exists somewhere between Dinosaur Jr and shoegaze. I'm calling it buzzgaze. Strong set with a weak last song that docked them half a letter grade.

James Blake (B-): I *get* James Blake. Seriously. This is music that's built for remixing. When it works, it can be cathartic and revelatory. Unfortunately, it didn't work for me as much as it did for rest of the crowd. On this night, IMHO, hype won out over performance.

Smith Westerns (A-): On the other hand, about a third of the buzz-chasing scenesters bailed out after the Blake set. Too bad. This Chicago four-piece delivered melodic indie rock to mostly lukewarm response.

Raphael Saadiq (B): Professional. Good energy. A bit stock. Saadiq's trying to rough up his music a little. Not sure it fits him as well and this performance wasn't quite as sharp as last year's Austin Music Hall set.

Duran Duran (B+): Although they might not be as pretty as they were in the 80's, Simon LeBon's still a very charismatic presence. When they ripped through "Hungry Like The Wolf", it was 1982 again.

All in all, a strong first day. Other than that, I'm tired already of hearing service and hotel workers use SXSW as an excuse for shitty service. Really? Like this doesn't happen every year?

Oh, and I'd give an A+ to the sweet potato bread pudding I had from a street vendor on Red River... :)

The legendary Woggles tear it up at Elysium during a SXSW day party...


Kayne @ #SXSW? That's what Idolator says. Details are firming up, but it looks like he'll be on at Midnight Saturday the 19th at the VEVO Power Station. 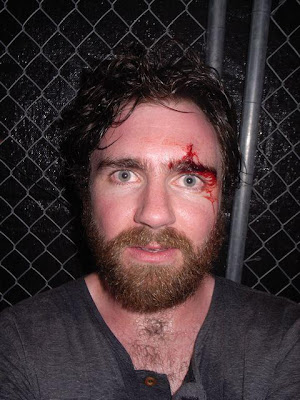 Get the second track from Nine Types of Light for the price of an email address here... 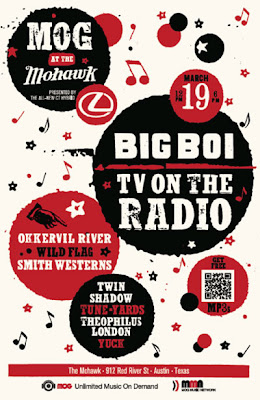 Of all the SXSW parties I've seen so far, this one looks like the top dog. Outkast's Big Boi, a red hot TV On The Radio, Musical Justice fav Okkervil River and buzz bands Yuck, Smith Westerns & Tune-Yards... I'll be able to check off several of the bands that I wanted to see this year in one afternoon. Check it out...

New video from Collapse Into Now...

Last of our video from the recent Voodoo Lounge show in Kansas City...

Another video from the Yorn show at Voodoo Lounge in Kansas City...

Trying our hand at posting our own videos on YouTube. This was shot a couple weeks ago on our handy new Flip when Yorn was at the Voodoo Lounge here in KC...

Counting Down to SXSW

Less than a week to go. We'll be firing things up here, so expect a significant upswing in content leading into our SXSW coverage!

Get Social With Us!

Musical Justice Chronicle on Spotify (Click through and put it on shuffle for best results!)

Musical Justice Downtime on Spotify (Click through and put it on shuffle for best results!)

Are you interested in having your voice heard on these pages? Do you already have a music blog that you would like to expose to a larger audience? Musical Justice is looking for a small number of talented writers. Email us at jc@musicaljustice.com for details.